Did you know this animal can solve problems like how to get into a jar with a screw top lid? Octopus have been known to climb out of their aquarium at night, find their way into adjacent aquariums, dine on the inhabitants, then make their way back to their own tank leaving keepers wondering where their other animals have disappeared to.

Octopus use their intellect and incredible eyesight to perceive their world in great detail and then recreate both colors and textures of their own bodies to fade away even when in plain view. Watch for the octopus to change colors in the blink of an eye, or develop dimpled ridges across its mantle to mimic the coral heads around it.

Only a select few of these species are on exhibit at any time. The octopus is the sole possessor of the Intellect adaptation. 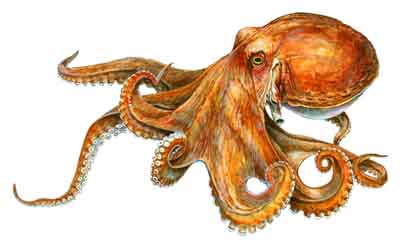 Habitat: They prefer the sea floor of relatively shallow, rocky, coastal waters. Often found hiding in rocky crevices or searching for food along the bottom.

Coloration: The common octopus can hide in plain sight due to its amazing ability to camouflage itself. The octopus' coloration range is quite large. It can almost instantaneously match surroundings in color, pattern and texture changes. This is done using a complex network of pigment cells and specialized muscles in the skin.

Feeding habits/specializations: The common octopus has a beak-like jaw which can deliver a terribly nasty bite to any prey; they also have venomous saliva which can help subdue the prey. Common foods include crabs, crayfish and mollusks. They may also discharge ink to disorient prey before attacking.

Reproduction: Males will sit next to or on the female and insert the hectocotylus into her mantle cavity. Spermatophores are then transferred over to the female. This may go on for several hours. The same pair of octopus may repeat the mating process over the next week or so, but they are not monogamous and will copulate with others throughout the reproductive period. The spermatophores are placed in the oviducts. As mature eggs pass while leaving the oviduct, the sperm cases are opened and allowed to discharge on them for fertilization. Empty cases are discarded. Secretions from oviduct glands combine with mucus creating a glue used to stick the egg stalks together in strings which are then attached to a substrate. Eggs are laid in shallow water. If the shores are rocky, the female will find a sheltered place and may even hide the area by covering it with shells or stones. Egg care includes cleaning the eggs with the arm tips and directing jets of water from the funnel through the egg masses. As a rule, females die shortly after the hatching of the last embryos. She spends her last energy guarding the nest and loses one-third of the pre-spawning weight.

Predators: Sharks, eels, dolphins. Octopuses will release a dark cloud of blank ink when attacked. This enables the octopus to try to escape while obscuring the attacker’s view. This ink contains a substance which is known to dull the sense of smell of any predator decreasing its ability to track the intended prey. An octopus can escape into tiny crevices because of their mostly soft bodies; if an octopus can get its beak (the only hard structure in the body) through an opening, it can squeeze its whole body through. A final defense against predators is the loss of an arm; if an attacker grabs on to an octopus, the octopus can “drop” or lose its arm and regrow it later with no permanent damage.

Conservation status: not evaluated; chance to be overfished but currently not at any specific risk

Fun facts: octopus have three hearts: one heart delivers blood to the body while two are designed to pump blood through two gills. 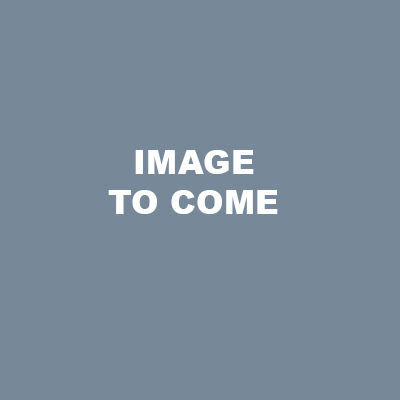 Distribution: Asterias forbesi is found in the intertidal zone of rocky shores on the Atlantic coast of North America from Maine southwards to the Gulf of Mexico.

Key characteristics for distinction: They belong to a group of animals called echinoderms, which means "spiny skin." They are related to brittle stars, sea urchins, sea cucumbers, and sand dollars. Sea stars have five arms, or rays, connected to a small round body. Sea stars detect light with five purple eyespots at the end of each arm. The bright orange dot in the center of the body is called the madreporite. This organ pumps water into the sea star's body. This pumping action creates suction at the end of hundreds of tube feet, located in paired rows on the underside of the arms.

Feeding habits/specializations: Sea stars use suction in the tube feet for movement and feeding. They wrap their bodies around quahogs and other bivalves, using the suction from their tube feet to pull shells apart. When the prey is opened, the sea star pushes its stomach out of its body and into the bivalve, secreting enzymes that digest the prey's soft body tissues. The liquefied bivalve is then absorbed into the stomach. Sea stars feed often, and their size depends on the amount of food they eat, not on their age.

Reproduction: Sea stars breed in the spring, producing as many as 2,500,000 eggs. Females will feel plump and spongy when their arms are filled with eggs.

Predators: Sea stars are eaten by bottom-dwelling fish and crabs, as well as by sea gulls when low tides leave the sea stars exposed.

Importance to humans: Sea stars are integral members of marine ecosystems, although they compete directly with commercial and recreational fishermen.

Fun fact: Regeneration will occur as long as one fifth of the sea star's body remains intact.

Maximum length (in inches or feet): 17 in

Predators: May be eaten by sharks. Hides from predators within oyster reefs and rocky areas. Protects itself with strong jaws and spiny dorsal fin.

Importance to humans: Becoming important as an experimental fish because of its size and hardiness.

Fun facts: An oyster toadfish will quickly take an angler's bait. But be wary of catching this fish — it has powerful, snapping jaws and sharp spines on the dorsal fin.