Directions
The Calvert Marine Museum is located on State Route 2 in Solomons, Calvert County, Southern Maryland, twenty miles south of Prince Frederick, and about an hour and fifteen minutes from Washington D.C. 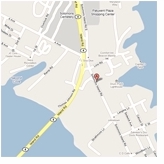 From Baltimore - Take Interstate 97 South from the Baltimore Beltway, to Route 2 South. Continue south on Route 2-4 to Solomons.

You can also take I-97 South to the Aris T. Allen Boulevard exit (Route 665), then follow signs for Solomons Island, Route 2 South. Go south on Route 2, following signs for Prince Frederick. Route 2 will join with Route 4 - make a left from Route 2 onto Route 2-4 South. Follow Route 2-4 South to Solomons.

Once in Solomons stay in the right lane of Route 2-4. It will exit to Route 2, passing under the Thomas Johnson Bridge. Make a left at the stop sign, drive approximately 200 yards, and the museum will be right in front of you.

From Richmond - Take U.S. Route 301 north into Maryland, then State Route 234 east to State Route 5, south on State Route 5 passing Leonardtown, left on State Route 4 across the Thomas Johnson Bridge (lower Patuxent River Bridge), exit onto State Route 2 at the north end of the bridge, turn right at the stop sign, and in approximately 500 feet the museum will be on your left.